After the success of last year’s Oscar winner predictions, we are excited to announce this year’s predictions. Furthermore, this year we count on our powerful BigML deepnets and their automatic optimization option which makes them one the best performing algorithms across platforms.

This year, there is a clear favorite, The Shape of Water with 13 nominations, but this doesn’t mean we are not witnessing a fierce competition between a wide set of high-quality independent films with stunning performances. However, models don’t care much about this as they don’t merely follow critics’ opinions. Instead, they search patterns based on the films that won in the past and make predictions for this year’s nominees. Ok… what data exactly?

Theoretically, models get better with more observations. Therefore, this year we are keeping all the previous data and features we had brought together for last year’s predictions. This amounts to a total of 1,183 movies from 2000 to 2017, where each film has 100+ features including:

The only major change in the data this year was the removal of the full user reviews from IMDB since they didn’t prove to be important last year and the effort to obtain them is relatively high.

As before, we train a separate model per award category. For a change, this year we’ll use deepnets, BigML deep neural networks, instead of the ensembles that we used last year.  Using BigML deepnets with their unique first-class automatic optimization option (“Automatic Network Search”) is the simplest and safest way to ensure that we are building a top performing classifier. Each model takes around 30 minutes to train since it’s training dozens of different networks in the background, but it is time well spent as the resulting model is very likely to beat others you’d configure via trial and error. 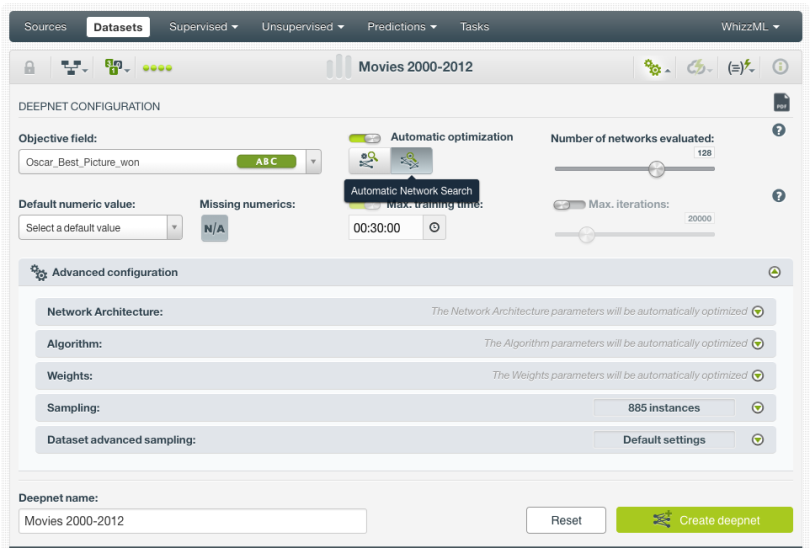 When the deepnet is created, we can easily inspect the most important features of the model and the impact of each of them on predictions.  For example, in the case of the Best Picture, we can find several awards like the Critics’ Choice Awards, the Online Film and Television Awards, the Hollywood Film Awards, and the BAFTA Awards among the top predictors. Alleviating the fact that deep neural networks tend to be hard to interpret, BigML offers a unique deepnet visualization, the Partial Dependence Plot, to analyze the marginal impact of various fields on your predictions.

To ensure our model is a good classifier, we trained it by using the movies from 2000 until 2012 and we then evaluated it by using the movie data from 2013 and 2016.  For all award categories, we obtained a ROC AUC over 0.98 which means that models were able to predict the winners for four consecutive years (2013 until 2016) with few mistakes. For example, see below the confusion matrix for the Best Actress model, where it predicts correctly 3 out of the 4 test years.

For each category, you can find the winner as well as the scores predicted by the model for the rest of nominees.

The Shape of Water is the heavy favorite for the Best Picture with a 91 score. However, the model also gives a respectable chance of awarding the prized statue to Three Billboards Outside Ebbing, Missouri with a 68 score. 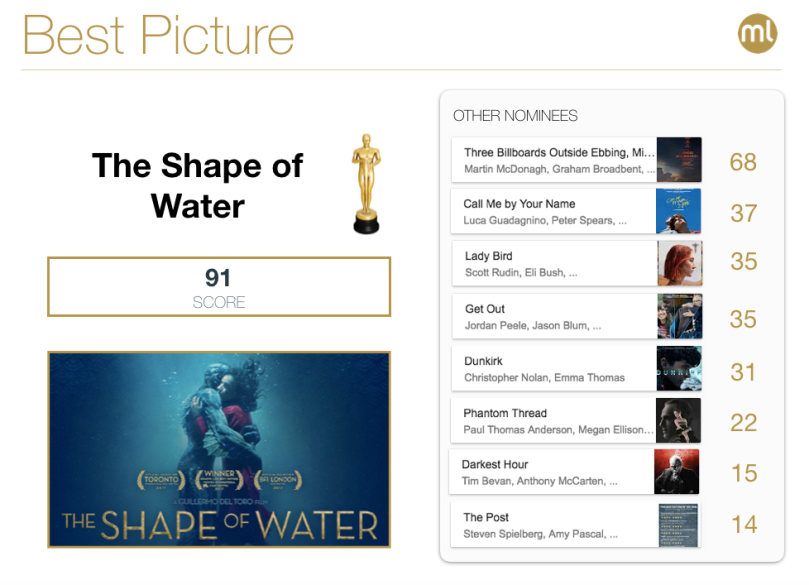 For the Best Director category, the model doesn’t have doubts. Guillermo del Toro is the likely winner with a score of 75 and no other nominee comes close.

Similarly, for Best Actress, there seems to be little competition.  Frances McDormand is the undoubtedly the favorite with a 99 score. Far behind, we can find Margot Robbie with a score of 5.

Gary Oldman is predicted by the model as the winner for Best Actor with a score of 88 for his amazing transformation as Winston Churchill in the Darkest Hour. However, he will need to subdue Timothée Chalament, the up-and-comer from Call Me By Your Name, who shows a score of 72 to win according to the model. Another strong rival is the consummate professional Daniel Day-Lewis with a score of 51 to win the award for his role in Poul Thomas Anderson’s film, Phantom Thread.

Among the five nominees for the Best Supporting Actress, the model favors Allison Janney for her role in I, Tonya with a 64 score. 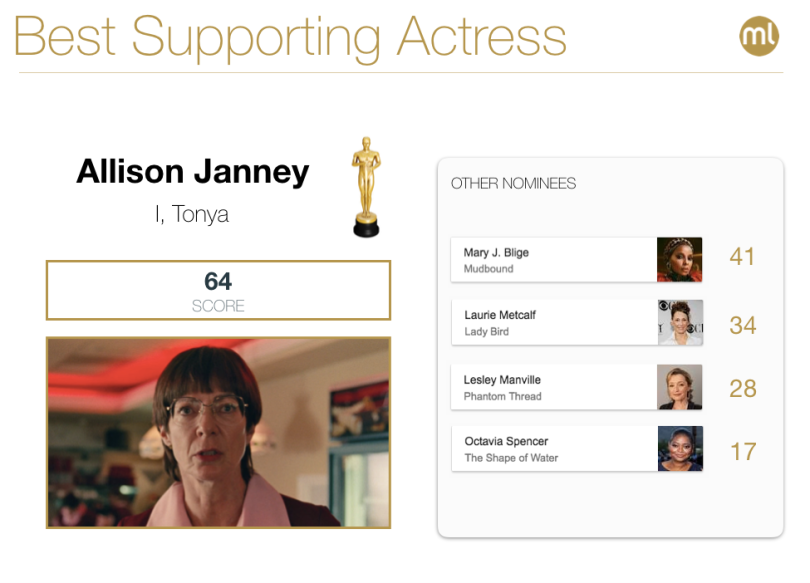 The Best Supporting Actor category has more competition, however, Sam Rockwell seems the clear favorite for his role in Three Billboards Outside Ebbing, Missouri with a 95 score. With that said, Willem Dafoe has also a decent chance for his performance in The Florida Project with a score of 61. 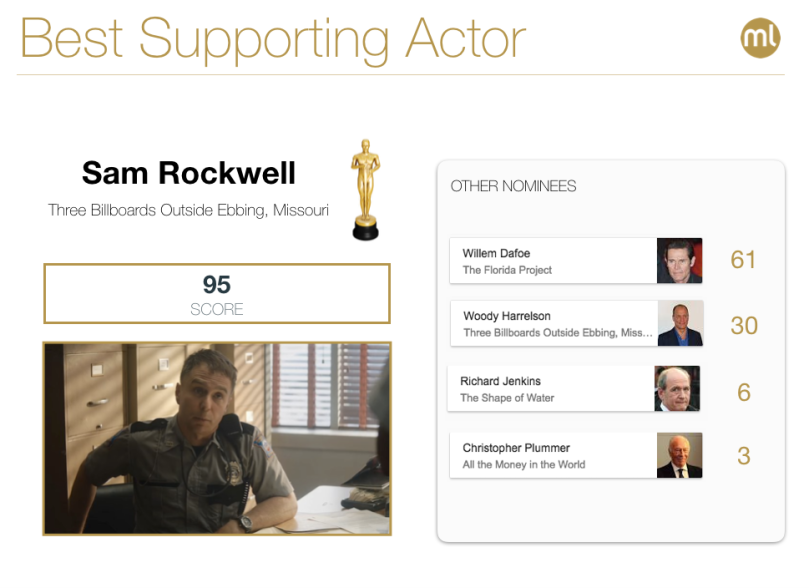 This wraps up our 2018 Oscar predictions. So it’s time to grab your popcorn, favorite drink and see who the real winners are this Sunday, March 4th. That is, unless Jimmy Kimmel and company come with another jaw-dropping snafu to mess up our models even if for a Hollywood minute!