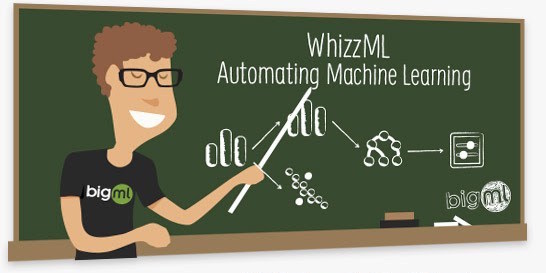 BigML first discussed some time ago how the performance of a predictive model can suffer when the model is applied to new data generated from a different distribution than the data used to train the model.  Machine Learning practitioners commonly identify two types of data variations that can cause problems for predictive models. The first, Covariate Shift, refers to differences between the distribution of the data fields used as predictors in the training and production datasets.  The other type of variation, Dataset Shift, denotes changes in the joint distribution of the predictors and the predicted data fields arising between the target and production datasets. A recent blog post showed how to implement one technique for detecting both types of data shift by using WhizzML.

The introduction of Anomaly Detectors in BigML provides yet another means using WhizzML for detecting data shifts that can affect the performance of predictive models.  As background for the simple technique we describe next,  you can read more about anomaly detection in a previous BigML blog post.  In a nutshell, an anomaly detector is an iforest of over-fitted decision trees.  Anomalous data items are outliers from the dataset and therefore are detected at shallower depth in the decision trees.  The depth at which an item is classified compared to the average depth of the decision trees is converted to an anomaly score that ranges from 0 (least anomalous) to 1 (most anomalous).

There are some features of the (create-and-wait-batchanomalyscore …) function that are useful for our purpose.   When this function is applied to the input production dataset, it creates a Batch Anomaly Score object and an output Dataset object that includes every row of the input production dataset object with an added score field containing the anomaly score for that row.  The batch anomaly score function also adds summary metadata to the output dataset metadata that we can use to compute the desired dataset shift measure.

A Few Helper Functions to get Started

To begin, we recall that predictive models are typically built by learning a model from a training subset of the source data.  The data shift detection script starts with a simple WhizzML function (sample-dataset …) that allows us to select a subset of the training dataset:

This minimal helper function primarily illustrates the few parameters one likely would want to use to select a subset of an input dataset.  In a WhizzML script customized for your application, you may want to use other parameters of the (create-and-wait-dataset …) function, that is described in the BigML Dataset documentation.

The script also includes a minimal WhizzML helper function (anomaly-evaluation …) to apply an anomaly detector to every row of the production dataset:

Again, just those parameters of the (create-and-wait-batchanomalyscore …) function needed to apply the “anomaly” detector with anomaly-id to an input “dataset” with dst-id are used.  Specifying both the “output_dataset”  and “all_fields” parameters as true requests creation of an output dataset that includes all  fields in the input dst-id and an anomaly score for each row in the dataset.  The Batch Anomaly Score documentation describes the full set of parameters you might find useful in your own WhizzML scripts.

The script includes one last WhizzML helper function (avg-anomaly …) that uses metadata the WhizzML (create-and-wait-batchanomalyscore …) function adds to the basic metadata of the output dataset, which it creates to compute an average anomaly score for how anomalous the input dataset is relative to the training set used to build the anomaly detector:

There are a few details worth noting here. We first must fetch the output dataset evdst identified by evdst-id.  The metadata associated with evdst includes a map “objective_field” that includes a sub-map “id”  that identifies the score-field in the metadata containing the anomaly results we need. Using that score-field value, we can access the “summary” sub-map in the “fields” sub-map of the metadata, where the total sum of the anomaly scores for all rows in the dataset and the population count of the number of rows in the dataset are found.  We return the quotient of these two quantities as our average anomaly score for the entire dataset as a measure of data shift.  The Dataset Properties section of the Dataset documentation provides more information about the properties we describe here as well as other properties you might find useful in a custom WhizzML script.

Using our Helper Functions to do Anomaly Scoring

We now can combine these minimal helper functions into a single function that computes an anomaly score for an entire production dataset relative to a training dataset.

In summary, this (anomaly-measure …) function:

This function also includes several details you might handle differently in your own WhizzML scripts.  The “train-exc” parameter is a WhizzML list of fields in the training dataset that should be ignored when the anomaly detector is created.  The “prod-exc” input parameter is ignored here since the contents of the “train-exc” input parameter determines what fields the anomaly detector will ignore in the production dataset.

Finally, our (anomaly-evaluation …) function includes some housekeeping features to support the higher-level functions in our WhizzML script.  You might find similar features useful in your own scripts.   The “seed” input string parameter passed to the (sample-dataset …) functions causes deterministic, and therefore repeatable, sampling.  Specifying the “clean” input as true causes the function to delete the intermediate working objects it creates before returning the average anomaly score.  This can be helpful when one repetitively computes the average anomaly score on a sequence of pairs of subsets of the testing and production dataset.

As just suggested, in practice we likely would want to repetitively sample the training and production datasets and compute a sequence of average anomaly scores for that sequence of samples.  The (anomaly-loop …) function in the script is explicitly does this in a form  that illustrates how you could also easily add other computations or logging in your own custom WhizzML scripts:

Next in our script we call the (anomaly-loop …) function inside a wrapper function:

Although this function could be eliminated in our script, you might find a similar function useful in your own custom WhizzML script as the place for adding additional computations on the sequence of average anomaly scores returned by the (anomaly-loop …) function.

The final high-level function in our script computes our final single numeric measure of data shift.  In our script, this is simply the average of the sequence of average anomaly scores returned by the (anomaly-measures …) function:

Finally, the example in the WhizzML script gallery concludes with the definition required to use the script in the BigML Dashboard:

This definition also demonstrates how you would call the top-level (anomaly-estimate …) function directly in your own WhizzML scripts. Thanks to WhizzML’s composability, using Anomaly Detectors to detect covariate shift is more convenient that ever.  We hope you get a chance to give it a spin and let us know how it goes!