This is a guest post by Erik Meijer (@headinthebox). He is an accomplished programming-language designer who runs the Cloud Programmability Team at Microsoft and a professor of Cloud Programming at TUDelft.

There is a lot of hype and mystique around Machine Learning these days. The combination of the words “machine” and “learning” induces hallucinations of intelligent machines that magically learn by soaking up Big Data and then both solving world hunger and making us rich while we lay on the beach sipping a cold one.

Worse yet, the esoteric and mathematical terminology of many Machine Learning textbooks and research papers fuels the mystique, resulting in the persona of the Data Scientist as the 21st century druid that mystically distills insight and knowledge from raw data.

For example, given the well-know “Iris flower dataset” as our test case:

we can apply Machine Learning to generate executable code that “predicts” the class of Iris given the four parameters:

The nice folks at BigML have created a service that allows developers like you and me to either use Machine Learning as TDD programmatically using a simple REST API, or manually using an elegant website. The process involves uploading a datasource (typically a csv file), converting it into a typed dataset, and finally creating a model using the decision tree generator algorithm. 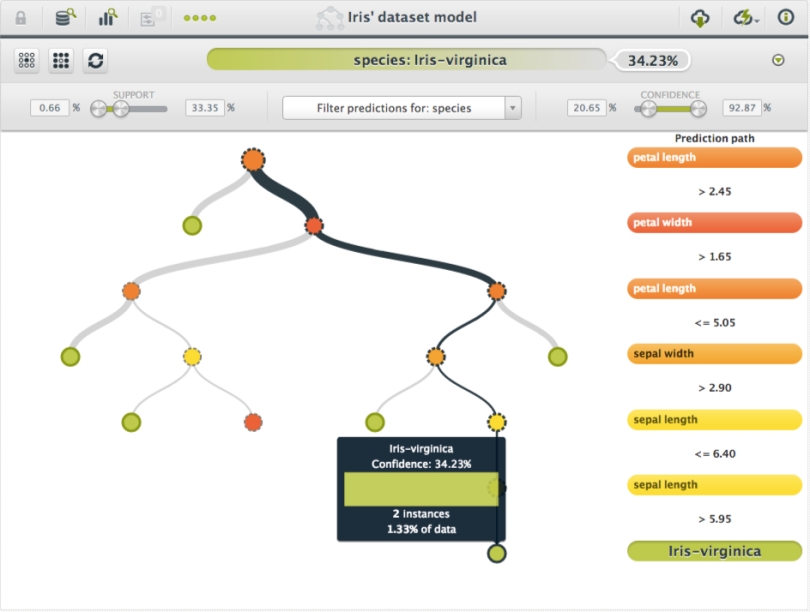 This model can then be rendered as code in several programming languages such as C#, Java, Objective-C, Python, etc or exposed as an interactive webpage where users can navigate the model by answering questions.

When confronted with a REST API, the very first thing that every sane developer does is to implement a high level abstraction that hides all the low-level details of making HTTP requests, creating query strings, and munching JSON. Developers from many languages that use BigML’s REST API  are no exception to this rule, and have created bindings for Clojure, iOS, Java, Python, R, Ruby  and now also .NET.

The .NET bindings for BigML that are available on Github expose a full LINQ provider, a strongly typed projection of all the JSON objects exposed by the REST API, as well as the ability to compile models to .NET assemblies.

To access BigML using the .NET bindings, you first create a new client object by passing your user name and API key. The client object provides (strongly typed) methods for all the operations provided by the BigML API as documented here; for example listing, filtering and sorting your BigML sources using LINQ queries. Of course the binding may not reflect all of the latest features, for example we do not implement Evaluations yet, but that is why we provide the source on Github. The implementation of the LINQ provider may be an interesting topic of study by itself, and follows the pattern as outlined in the CACM paper “The World According to LINQ”.

Below is an example of how to create a new source from an in-memory collection, then a dataset and finally a model. Since the BigML resource creation is asynchronous we need to poll until we get the status code “finished” back from the service.  Note that BigML (and the .NET bindings) also supports creating sources from local files, Amazon S3, or Azure Blob store.

Of course what we are really after, since we want to show that Machine Learning is automated TDD, is the generated model for our source. The model description is a giant JSON object that represents the decision tree that BigML has “learned” from the data we fed it. In the example below, we translate the model into a .NET expression tree, compile the expression tree into a .NET delegate, and then call it on one of the test inputs to see if it predicts the same kind of iris:

We hope that this library makes BigML easily accessible to .NET programmers that want to incorporate Machine Learning in their applications. And we hope to see it flourish like all the other bindings for BigML that are available at https://github.com/bigmlcom/io.