This year, we continue the tradition of predicting the winners of the most anticipated movie awards of the year, The 92nd Academy Awards. 2020 nominees present us with an interesting mix of “sure bet” categories alongside some more contentious ones that can be ripe for at least some mild surprises. Nevertheless, we’re excited to share our predictions and see how the Academy Awards pan out this Sunday! 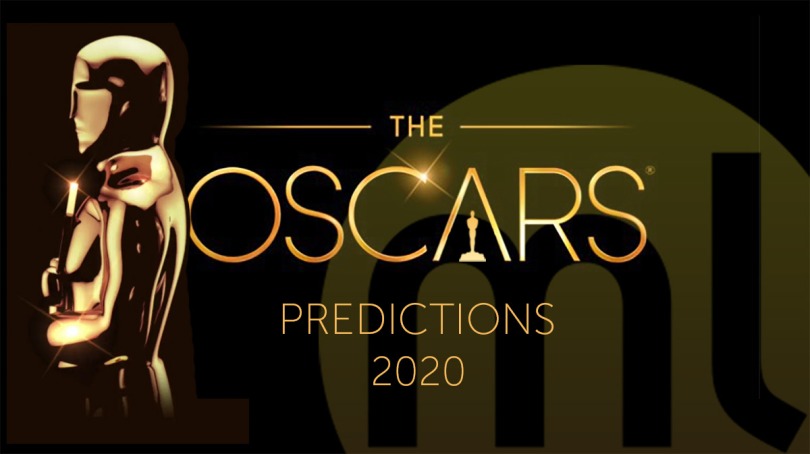 If you’re up for some DIY Machine Learning fun, you can find our Movies dataset on the BigML Gallery and build your own models to actively join in the fun after you create a free account.

Machine Learning models typically improve with more data instances so we have kept all the previous data and features we considered for previous years’ predictions, and we added data from 2019, all of which amount to a total of 1,288 movies nominated for various awards from 2000 to 2019. In the resulting dataset, each film has 100+ features including:

We’ve tried multiple modeling approaches such as OptiML, the optimization process on BigML that automatically finds the best performing supervised model, individual Deepnets along with some Fusions, which combines multiple supervised models for potentially more robust performance. For each award category, eight in total, we trained separate models to see how the predictions would compare and which method would give the best results.

Once our candidate models were created, we made Batch Predictions against the movies produced in 2019 that we had set aside in a separate dataset. We quickly found that the individual Deepnets models configured with the Automatic Network Search option gave out more clear cut answers for winners so we decided to favor those to avoid a muddier picture.

For example, the field importance report below is that of the Best Picture Oscar and it shows that fields like synopsis, nominations in BAFTA, Critic’s Choice, Online Film TV Association, Golden Globes, LA Film Critics Association and wins in Online Film Critics Society and People’s Choice all factored in strongly in calculating the final scores for each Best Picture nominee.

Without further ado, let’s predict the 2020 winners! For each category, we predict the most likely winner along with other nominees sorted by decreasing scores. Keep in mind that these scores aren’t supposed to add up to 100. Rather, they are “points” given to the nominee by the underlying Deepnet model on a scale of 0 to 100. Another way to look at this is that the model is telling us how a movie/artist with a given set of characteristics will do in a given award based on 19 years of historical data on that award AND independent of the other nominees for the same award this year.

The Best Picture award is customarily awarded last in the real ceremony, but we’ll turn that order upside down here for you so we get to start with a B-A-N-G! Our models (Deepnets, OptiML) gave a strong nod to Once Upon a Time…in Hollywood in what can be portrayed as a rather controversial choice. The projected winner gets a very high score closely followed by the South Korean production Parasite and Martin Scorsese‘s epic, The Irishman both of which have respectable scores of their own. On the other hand, the award season favorite 1917, which comes fresh from its “Best Motion Picture – Drama” victory in the Golden Globes didn’t fare too well according to our final model. If we are right, this won’t be the first time Golden Globes and The Academy Awards go in separate directions. 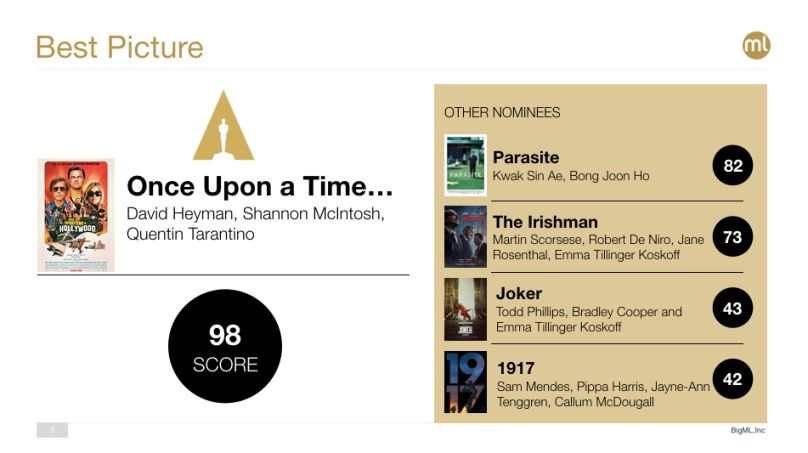 In the Best Director category, our model finds a considerably larger margin in scores and predicts that Sem Mendes will be the most likely recipient of the gold statuette. If that is correct, 1917 fans may find solace in this scenario despite falling short in the Best Picture category. With that said, Todd Phillips of Joker, Quentin Tarantino of Once Upon a Time…in Hollywood and even Bong Joon Ho of Parasite received scores that are hard to sneeze at so a surprise win from either them should not be seen as a complete shocker.

For Best Actress, Renée Zellweger in Judy has swept many awards this season and is as good a shoo-in as one can hope for with a score of 90 and a clear separation from the second favorite Scarlett Johansson, who held her ground with a score of 45 vs. the remaining nominees.

The award with the largest score margin between the predicted winner and the next best nominee this year turned out to be Best Actor. It will indeed be considered a big upset if Joaquin Phoenix fails to walk away with the Oscar given how low the scores for his competition came out.

The Best Supporting Actress category seems Laura Dern‘s to lose despite a less than stellar score of 55 historically speaking. Florence Pugh looks like the clear second choice, but not close in terms of her score.

The Best Supporting Actor award presents an interesting challenge as both Joe Pesci and Al Pacino are in The Irishman thus arguably hurting each other’s chances despite decent scores. This means our model likes none other than Mr. Brad Pitt to pick up the award at the expense of those two veteran performers.

Parasite seems to be the best bet for Best Original Screenplay with a score of 58 and a healthy margin against other nominees that our model predicts would make historically weak selections for this award.

And last but not least, our model picks The Irishman as the winner of Best Original Screenplay. The margin between The Irishman and the second-placed Little Women tells us it will likely take more than luck of the draw for the other nominees to unseat the favorite.

This concludes our 2020 Oscars predictions. As you get ready for the ceremony on Sunday, February 9th, you can now choose to make Machine Learning part of your night. Best of luck to all nominees and a big thanks to the Academy of Motion Picture Arts and Sciences (AMPAS) for carrying the tradition since 1929!