Once upon a time in the Wild Wild West, a company with big aspirations was founded in a small town called Corvallis. If you’re thinking to yourself, “Wait, where is Corvallis?” don’t worry, you’re not alone. The BigML Team gets this question all the time when we present at conferences, events, and meetings around the world. We also get frequently asked, “How come BigML is not founded in the Silicon Valley?” 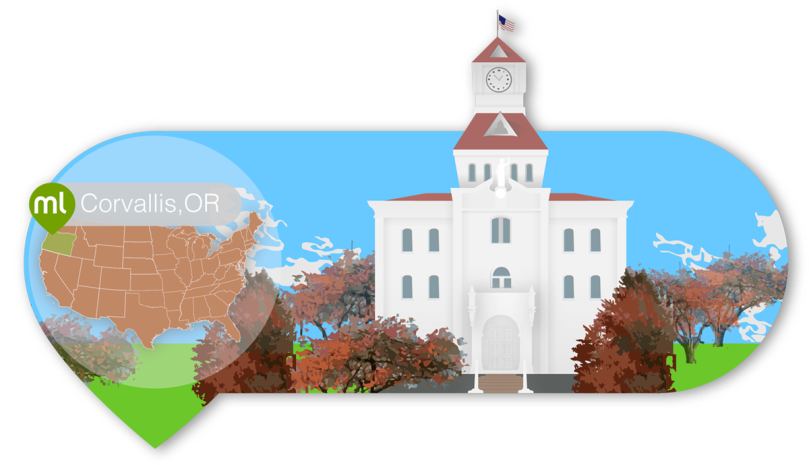 Here at BigML, we are proud of our small town roots in Corvallis, Oregon, USA. Corvallis may be little-known outside of the USA or even Oregon, but big things often come from small beginnings, as the saying goes. So, to answer these questions FAQs, we want to share the key reasons why BigML was founded in Corvallis, and why a big part of our team continues to love it there.

Many companies believe that to innovate, you need to have a direct presence in the Silicon Valley, and they dream of recreating a similar innovation engine elsewhere. However, in spite of Silicon Valley’s advantages like the strong density of experienced entrepreneurs and investors, these come along with a number of problems that limit innovation such as:

It may come as a surprise to some, but the innovation rates per capita in the Silicon Valley are not that high when relatively compared to other, lesser-known innovation hubs in the USA like Corvallis. Corvallis, which resides in the Silicon Forest, has many advantages:

Another plus to the workforce in Corvallis is the retention rates. People tend to be loyal and stay with companies for years, compared to the “mercenaries” in the Silicon Valley where people often jump from one job to another for a salary increase each year.

Corvallis is consistently rated as one of the safest, smartest, greenest small cities in the USA. It’s located in the heart of the Willamette Valley in Oregon, USA, with a population of 55,000+. This does not including the approximate 25,000+ students attending Oregon State University (OSU), which is ranked among the top 1 percent of world universities.

Corvallis serves as a conducive place for innovation, for students and entrepreneurs alike. As an example of what makes this town special, Corvallis hosts da Vinci Days, an annual event that celebrates the community’s creative spark in Science, Technology, Engineering, Arts, and Mathematics (STEAM) fields. Who knew that you could bike on water?!

Turns out, we aren’t the only ones who believe Corvallis is a great place to live and to build a company. But you don’t have to just take our word for it. Livability released a report in January listing Corvallis as the 3rd best place to live in the United States, and NerdWallet ranked Corvallis as #4 of America’s Most Innovative Tech Hubs, following San Jose, CA; Boulder, CO; and San Francisco, CA. Even better, Corvallis was ranked #1 for patents in the United States in 2011, which coincidentally was the year that Apple acquired 32 Patents, 5 of which were invented by Francisco Martín, BigML’s CEO, and others in Corvallis (e.g., System for browsing through a music catalog, Mediaset generation system).

BigML fits right in with this innovative community, with 6 patents and 12 patent applications of its own. Besides BigML, there are a number of leading companies that have set up shop in Corvallis, including both global enterprises and small startups. Here are just a few examples:

The strong, innovative community in Corvallis comes from its highly educated workforce. Over 50% of Corvallis adults have a bachelor’s degree or higher , and the city boasts a low unemployment rate of 2.7%, as of December 2017. Although Corvallis itself is not a large city, one million workers live within a 70 mile radius of Corvallis , so there is deep talent pool in the area. Oregon State University, and other schools in the region such as the University of Oregon (UO) and Portland State University are big drivers of this smart, experienced workforce. But make no mistake, BigML is loyal to the Beavers (OSU). For those outside of Oregon, there is a strong rivalry between the Beavers and the Ducks (UO).

When it comes to research, OSU leads the pack as the #1 public research institution in Oregon (receiving $441 million in research funding in 2017). On a national level, OSU’s College of Engineering is one of the largest and most productive engineering programs, including their leading Artificial Intelligence and Robotics program. Of particular interest is the Explainable Artificial Intelligence group, which received a $6.5 million DARPA grant to make Machine Learning based systems (e.g., autonomous vehicles and robots) more trustworthy by enabling these systems to effectively communicate with humans.

Seven BigML Team members studied at OSU (including the CEO, Francisco Martín), and they received a total of 10 degrees (3 Bachelors, 3 Honors Bachelors, 2 Masters, 1 Ph.D. and 1 Postdoc). BigML’s Chief Scientist, Tom Dietterich, is a Distinguished Professor (Emeritus) and Director of Intelligent Systems at OSU. Which brings us to the main reason why BigML was founded in Corvallis…

Fast forward to 2010. One thing leads to another, and Martín, Dietterich, and Ashenfelter start discussing a new venture that will build a cloud-based Machine Learning service…you guessed it, BigML! In January of 2011, BigML was founded with the mission of making Machine Learning beautifully simple for everyone. Later that year, Parker and Poul Petersen (another OSU grad) joined the team. So there you have it – how BigML began in charming Corvallis, Oregon.

The BigML Team in Corvallis will be presenting at the upcoming Willamette Innovators Network (WiN) PubTalk event, which brings together the local business community to network and share ideas. If you are a BigML user in the Corvallis area, it’d be great to have you join us this Tuesday, February 13 from 6-8pm in Downtown Corvallis. Please see the WiN events page for more details.

Lastly, BigML loves to hire local talent, so check out our openings if you’re interested in bringing Machine Learning to the masses from Corvallis with the BigML Team!