At BigML we are always striving to provide our users with the best options to integrate machine learning into their workflows, be it through our bindings, available for the major programming languages, our BigMLer command-line tool, BigML for Google Sheet Add-on, or our proprietary Domain Specific Language WhizzML. Our latest effort in this direction is providing the means to integrate the BigML platform into Web-based automation tools such as Zapier, a web service that allows end users to create workflows across different web applications, including Google Drive, Salesforce, Gmail, and many others.

Today, we’d like to give you a preview of the new BigML Predict Action for Zapier, which will allow users to make predictions using Models, Ensembles, Logistic Regressions, or Clusters in their BigML account as part of a larger Zapier workflow. Imagine the following scenarios:

These scenarios represent just a couple of possibilities on how to integrate the BigML Predict action in a Zapier workflow. The following images shows a simple Zapier workflow that polls a Google Sheet for new input data, uses those inputs to make a prediction by using a given model, then stores the prediction in a separate sheet.

Using Zapier UI you can easily map the data in your Google Sheet as input to a BigML Predict action: 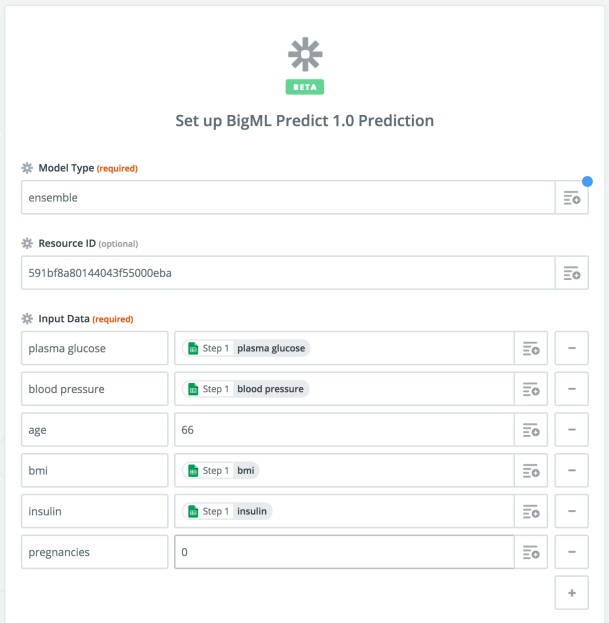 Once you enable your Zapier workflow, it will check the input Google Sheet for new data and automatically store the prediction in a second Google Sheet:

The BigML Predict action for Zapier is available as a beta for any BigML customer that is willing to try it out. Just get in touch with us and we will provide you access to our new Zapier action.